“A man is rich in proportion to the number of things which he can afford to let alone.”  - Henry David Thoreau

Protecting our forests in this time of climate crisis and biodiversity collapse is recognized as an important way to protect our environment and our future health and well-being. Two bills have been submitted to the Massachusetts Legislature this session. One would permanently protect 412,000 acres under the care and control of the Division of Conservation and Recreation. The other would permanently protect 30% of the land owned by Fish and Wildlife, about 51,000 acres,  by 2030. These state agencies already have land in reserves where intact ecosystems are influenced primarily by natural processes. These bills request more reserves than we now have, and give them legal protection that they do not currently have. Together these actions would help Massachusetts to do its part to help mitigate climate change and protect our native natural heritage.

The 2022 DCR Landscape Designation events are underway!
Many of you supported the bills submitted to the legislature last session, H.912 and H.1002.
While we are disappointed that the legislature did not take action on them, we now can say the same things to the Department of Conservation and Recreation (DCR) during this 10 year review of how our state parks and forests are managed.
Written comments are due September 28th.
The current DCR plan, written in 2012,  is here: https://www.mass.gov/files/documents/2016/08/qq/management-guidelines.pdf
Your written comments will become part of the record and will be available for others to see on the DCR website.
Save Massachusetts Forests is saying the same things that we said when working on the bills. That is, all DCR land, including the watersheds, become either “parks” or "reserves" where land management is similar to our National Parks.
Here is a sign-on letter that you can submit to DCR with this simple message:
We, the undersigned, call for state-owned lands administered by the Massachusetts Department of Conservation and Recreation, including all woodlands, reserves, watersheds, and undeveloped parklands, to be designated and permanently protected as Carbon and Biodiversity Reserves. These Reserves would protect intact ecosystems, which are influenced primarily by natural processes, with only minimal human interference. Limited management activities would be allowed if proven to be necessary to protect public safety, endangered species, or the environment.
The petition link is here:
on line DCR comments
If  there are specific DCR lands that you know and love, you can add comments to the on-line letter. To write you own letter, the link is here :  www.mass.gov/dcr/public-comment.

Sign up for Action Alerts - e-mail us at savemassforests@gmail.com

"I strongly support this bill, which would permanently protect 13 percent of the Massachusetts land area, reaching from the Berkshires to the Atlantic Coast. This is the single most important action the people of thestate can take to preserve our natural heritage. As it has many times in the past, Massachusetts can provide leadership on this issue, inspiring other states across the country to take similar bold  action." 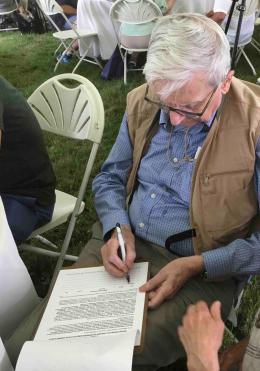 "Whenever you find yourself on the side of the majority, it is time to pause and reflect." — Mark Twain